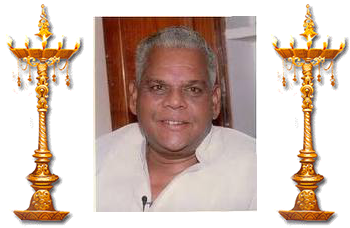 Sri. G. K. Moopanar who is affectionately called PERIA AYYA in south India, came from a Family of rich landlords, in Kabisthalam situated inThanjavur District, He was born as 19.08.1931. His father Shri. Govindasamy Moopanar was a great lover of Music. He used to invite leading Carnatic Musicians of his days to his Bungalow and hear their Music and honour them heavily. As an youngster Shri. G.K. Moopanar used to hear those Music performances and developed a desire for music even from his younger days. In the year 1950 or so he became interested political activities worked in the Congress for 1952 Elections and later came in contact with late Kamaraj, who made him The President of Thanjavur District Congress Committee in the year 1965. In the same year Sri. Thigabrahma Mahotsava Sabha the sponsors of Annual Aradhana Festival of Thyagaraja had some differences of opinion among the Members and a dispute came among the musicians as to who should contact the festval. Then all the leading musicians who were conducting the music festival at Thiruvaiyaru before the Saint’s Samathi agreed to abide by the direction of Shri. GKM in the matter and went to his House at Sundara Perumalkoil at Kabistalam and placed the issue before him. Semmangudi Srinivasa Ayyer, Musiri Subramanian Iyer, V.D. Swamy and Thiruvizimalai Brothers, Thiruvengadu Subramania Pillai accompanied the delegation, Shri, GKM settled their disputes amicably to the satisfaction of all. Then all the musician requested Shri GKM to be the president of the Sabha.

As usual GKM refused to accept any office and said that anyone of them could be the president and that he would give all support. But all the musicians in one voice insisted on his becoming the president and Shri, GKM become the president of the Sabha in the year 1966 which he held till his passing away. It is only during his days of presidentship, the sabha rose to great heights and become an all Indian and International festival. He used to take personal interest in inviting dignitaries for inaugurating the festival. He had brought two presidents of India, one Vice President, a number of Central Government Ministers, High Court and Supreme Court Judges, State Governors and religious leaders like Kanchi Sangaracharya, Shri, Dayananda Saraswathi Swamigal and Kripananda Wariar, After several decades it is only during his period, the festival was celebrated for ten days to commemorate the 150th year of celebration of the Sabha. Shri, GKM had a deep commitment to any cause he stood for, and he had a deep respect and regard for the opinion of others despite the fact that he might have had differences on many issues with them. He was always amendable, never adopting a rigid stance, accepting criticism in the right spirit and ready to accommodate the views of others. Moreover his polite nature and simple living were qualities that were impressive. He was a man of few words and never gave unsolicited advice but when he did he was always forthright and simple in articulating his views. He has always been firm in upholding secularism and putting up an uncompromising fight against all communal forces. His outlook has always been devoid of parochial considerations. His strong commitment to the national interest put him in the company of National leader cutting across party lines. Money and wealth did not influence his lifestyle.

Sri. GKM had been the president of the Sabha for 36years and his services to the Sabha are laudable. After the demise of Sri. GKM, Sri G. Rengaswamy Moopanar who was trustee of the Sabha for several years was requested to hold the post of the president of the Sabha and was unanimously elected as president since 2002, Like his elder brother Sri. GKM, Sri G. Rengaswamy Moopanar who is affectionately called as “Chinna Ayya” is a great lover of Carnatic Music and a critic who keeps close associations with the Sabha and spares no time to work for the upliftment of the Sabha. The Sabha is also fortunate that Sri. G K Vasan MP., The then President of Tamil Nadu Congress Committee, the son of Late Sri GKM has been elected as the Chairman Board of Trustees of the Sabha. Sri. GK. Vasan evinces great interest in the Sabha like his revered father the Late Sri GKM.