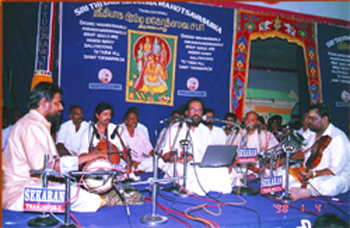 Thyagaraja was born on the 4th may, 1767, at Tiruvarur in the thanjavur district of tamil nadu. He belonged to a family of pious and scholarly telugu Brahmins whose family name ‘kakarla’ indicate that they were originally migrants from the village of the same name in the cumbum taluk of Andhra Pradesh. His father, rama brahmam, was a distinguished exponent of the Ramayana and was patronized by tulajaji, the ruler of thanjavur. Thyagaraja in his formative year, must have listened to his father’s scholary exposition of valmiki’s epic. Devotion to rama became ingrained in his from his youth.
Born with scholarship and music in his blood, thyagaraja completed a study of Sanskrit, telugu and allied subjects while in his teens. He must have mastered the valmiki ramayanam, potana bhagavatam and other religious literature with the help of his father. But the musical instinct in him was so strong that before the age of 13 he not merely gained an adequate mastery over vocal music but also composed his maiden song ‘namo namo raghvaya’ (Sanskrit) in desya todia. Rama brahmam, who immediately recognized his son’s extraordinary gifts, placed him under the tutelage of sonti venkataramanayya. Venkatasubbayya was the chief among the then place vidwans of thanjavur. Thyagaraja’s apprenticeship appears to have been a short one during which he learnt all that his furns had to teach.

With a view of improving his knowledge of musical theory thyagaraja secured from the house of giriraja kavi treatises on music like the ‘naradiyam’ and avidly commenced studying them. He, however, came across many portions which he could not comprehend. Even as a boy thyagaraja had received, from a saint called ramakrishnananda, initiation into the ‘rama shadakshari’ mantra and was constantly repeating it sence that day. He not sought the counsel of this guru and on his advice performed japa of the narada mahamantra. He soon had a vision of sage narada who is stated to have given him a treatise called the ‘svararnavam’. A serutiny of this work enabled thyagaraja to clear all his doubts and by way of thanksgiving, he composed four kritis on narada and a verse on ramakrishnananda which he later included in his ‘nauka charitram’.

The spiritual initiation he received early in life led to a unitive experience that lodged firmly at the very core of his being. When he completed a crore or rama nama, thyagaraja had a momentary vision of his ishta devata and sang its glory in the kriti ‘ela ni daya radu?’ in athana. He is stated to have completed 96 crores of rama nama over some years.

Prolific outside of music:

Thyagaraja now embarked on his long and purposeful career as a composer of music. His fame was spreading fast and his proud guru venkataramanayya invited him to sing before an audience comprising the leading musicians of tiruvaiyaru. The walajahpet manuscript of Thyagaraja’s life records that he first sant ‘janaki ramana’ (suddhasimantini) and then ‘doruluna ituvanti’. He sang a detailed ‘neraval’ at the phrase ‘kamita phaladayaki’ in the charana with variegated patterns of endless beauty. His guru openly eulogized thyagaraja’s performance and exclaimed ‘can one get a disciple like this?’ he decorated thyagaraja with his own medals which, however, the latter returned at the time of the marriage of venkataramanayya’s daughter.

On another occasion, when thyagaraja was twenty five, he was asked by sonti venkatasubbayya to sing before a similar audience at thanjavur. The performance went on till late in the night. This time thyagaraja sang a memorable alapana of kambhoji and his own composition ‘marimari ninne’. The musicians present were transported with joy and forgot completely an important engagement they had to fulfil at the palace. Venkatasubbayya declared that he was not qualified to call himself thyagaraja’s guru as his own knowledge of music was like a single leaf when compared to that of Thyagaraja which was like a flower garden. When serfoji, the ruler of thanjavur heard of this incident, he expressed a desire to hear thyagaraja’s music. The latter firmly declined to go to the place and sing before him. However, moti rao, brother-in-law of serfoji and some state ministers used to visit tiruvaiyaru and listened to thyagaraja’s bhajanas conducted in his humble dwelling.

In the music of thyagaraja tradition and invention found a unique balance. He studied with loving reverence the work of the great master-composers who had laid the foundations of Karnataka music like purandara dasa, kshetrajna, margadarsi sesha lyengar and narayana tirtha. He mastered the theory of his art not merelyfrom books but from the practice of the virtuosi of his time. He made endless experiments; he was always striking out along new lines. It was the periclean age of Karnataka music and the environment around him was remarkably rich both on the theoretical as well as on the practical sides of music. Thyagaraja was as much a product of that age as he was one of its makers. Veterans like virabhadrayya had already set up conventions and standards for the systematic presentation of music. The thanjavur court is stated to have had some 300 musicians of repute under its patronage. Many of them had already proved their mettle both as performing musicians and as composers. It was in the midst of these giants that thyagaraja was called upon to take up this challenging role.

His formidable contempories included pachimiriam adippaiya and pallavi gopala lyer not to speak of syama sastri and muthuswami dikshitar who stood in a class of their own. To those of thyagaraja’s contemporaries who might have regarded his talent as mainly lyrical and devotional, the majestic sweep of the epic style displayed in the ‘pancharatna kirtanas’ must have come as a blinding revelation. Though he handled the madhyama kala and the adi tala by preference, he was equally at home whatever the time measure. Many a raga of which little more than the name was known before his time began to dance its way though the human heart under his life-giving touch. Of each of them he made a fit vehicle for a recondite emotion, which others may have felt before but none could so well express. The fertility of his imagination and the variety, richness and grace of his phrasing open up endless vistas for the musical explorer.