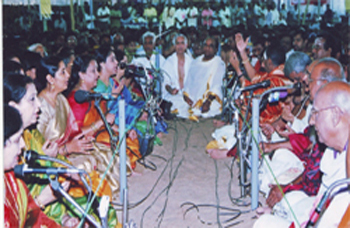 When a great person achieves distinction in two fields of human endeavour which are related, it is difficult of assess the value of his eminence in any one of them separately. Thyagaraja was a great saint as well as a great musician. In his mind, music played a subordinate a part and devotion to his chosen deity played the dominating part. He used music as an appropriate vehicle for the journey towards salvation. Posterity, however, remembers him primarily as a great omposer and the association of religion, with his music is very often taken as part of the musical tradition of India of which he was a leading light. This difference in approach between the composer himself and the inheritors of his contribution has led to estimations of his contribution has led to estimations of his music based on spiritual sympathy and panegyrics of is sainthood based on musical appreciation.
From the point of view of pure music, on may take the view that several of his songs relate to incidents in his life an that they are therefore encumbered with an accessory which makes their appeal partly musical and partly biographical. It is beside the point to say that the link between life and song has endowed his compositions with a unique richness and with the combination of a particular personal emotion with its appropriate musical mode. This is true, but it involves an element of human drama in appreciation, a sharing of experience, an emotional sympathy, and a satisfaction which is non-musical, but mystic in its character. This is no derogation of its total excellance, but only to clarify that the sum of the experience is an addition of two feelings, each of which is capable of existing separately. But which of the two was more dominant in him? It is here that his opinion of himself need not be the same as our opinion of him.

One has to face the fact boldly awhile there have been many saints whose caliber, devotion, and mystic achievements equal those of Thyagaraja, in the field his place is unique and his eminence unsurpassed. The religion and philosophy which are inherent in his compositions should, therefore, be taken as the longings an expression of a musician who was asaint rather than those of a saint who was a musician, whatever may have been his own conception of himself or of the place an function of music in life. In this view, any attempt to over-analyse or to categories his his philosophy as revealed in his compositions leads to a certain degree of confusion which is inevitable. This is so not merely because Thyagaraja did not set out to evolve a doctrine of devotion or a guide to salvation, but was merely concerned with giving expression to the sentiments of the moment, but also because he was himself groping for the unattainable and in this process necessarily experienced several emotions which were themselves varied and fluctuationg. It is, however, instructive to see the ramifications of his struggle in this search and to examine whether, in fact, he did attain his goal here below or continued to search till the end.

His compositions fall into three broad class is : one set represented by songs like Sanggethagnammamu bhakti vina, Sogasuga Mridanga Talamu, Nadopasana , Nada Loudai, Anand Sagara, Sitavarasangita, Svararaga Sudha, Ragasudha Rasa, Vara Raga Laya, Sobhillu Saptaswara and others related to his views on the correct place of music in life, it main purpose, its yogic character, its link with devotion and the high seriousness with which it should be approached.

A second series of compositions deals with the characteristics of a true devotee and one who lives correctly. It is significant that Thyagaraja was not concerned with happiness as ordinarily understood but more with the disciplines and procedures necessary for correct living. He perhaps felt, as has been observed by a recent wirter, that happiness cannot be pursued, but that it is a by product of correct living.

The following composition may be cited as instances in this group: Emi Jesithenami, Ide Bhagyamu, Bhakuni Charitramu, Atade Dhanyadu ra, Manasu Nlpa saktim Lekapote, Samayamu Delisi, Balamu Kulamu, Kalala Nerchina and other. The main theme of these songs is a scorn of the pursuit of earthly glory, possessions and wealth, and praise of steadfast devotion to God; else all learning is unproductive and futile, all austerities useless and all life a waste.

With a view of improving his knowledge of musical theory thyagaraja secured from the house of giriraja kavi treatises on music like the ‘naradiyam’ and avidly commenced studying them. He, however, came across many portions which he could not comprehend. Even as a boy thyagaraja had received, from a saint called ramakrishnananda, initiation into the ‘rama shadakshari’ mantra and was constantly repeating it sence that day. He not sought the counsel of this guru and on his advice performed japa of the narada mahamantra. He soon had a vision of sage narada who is stated to have given him a treatise called the ‘svararnavam’. A serutiny of this work enabled thyagaraja to clear all his doubts and by way of thanksgiving, he composed four kritis on narada and a verse on ramakrishnananda which he later included in his ‘nauka charitram’.
The spiritual initiation he received early in life led to a unitive experience that lodged firmly at the very core of his being. When he completed a crore or rama nama, thyagaraja had a momentary vision of his ishta devata and sang its glory in the kriti ‘ela ni daya radu?’ in athana. He is stated to have completed 96 crores of rama nama over some years.

Prolific outside of music:

Thyagaraja now embarked on his long and purposeful career as a composer of music. His fame was spreading fast and his proud guru venkataramanayya invited him to sing before an audience comprising the leading musicians of tiruvaiyaru. The walajahpet manuscript of Thyagaraja’s life records that he first sant ‘janaki ramana’ (suddhasimantini) and then ‘doruluna ituvanti’. He sang a detailed ‘neraval’ at the phrase ‘kamita phaladayaki’ in the charana with variegated patterns of endless beauty. His guru openly eulogized thyagaraja’s performance and exclaimed ‘can one get a disciple like this?’ he decorated thyagaraja with his own medals which, however, the latter returned at the time of the marriage of venkataramanayya’s daughter.

On another occasion, when thyagaraja was twenty five, he was asked by sonti venkatasubbayya to sing before a similar audience at thanjavur. The performance went on till late in the night. This time thyagaraja sang a memorable alapana of kambhoji and his own composition ‘marimari ninne’. The musicians present were transported with joy and forgot completely an important engagement they had to fulfil at the palace. Venkatasubbayya declared that he was not qualified to call himself thyagaraja’s guru as his own knowledge of music was like a single leaf when compared to that of Thyagaraja which was like a flower garden. When serfoji, the ruler of thanjavur heard of this incident, he expressed a desire to hear thyagaraja’s music. The latter firmly declined to go to the place and sing before him. However, moti rao, brother-in-law of serfoji and some state ministers used to visit tiruvaiyaru and listened to thyagaraja’s bhajanas conducted in his humble dwelling.

In the music of thyagaraja tradition and invention found a unique balance. He studied with loving reverence the work of the great master-composers who had laid the foundations of Karnataka music like purandara dasa, kshetrajna, margadarsi sesha lyengar and narayana tirtha. He mastered the theory of his art not merelyfrom books but from the practice of the virtuosi of his time. He made endless experiments; he was always striking out along new lines. It was the periclean age of Karnataka music and the environment around him was remarkably rich both on the theoretical as well as on the practical sides of music. Thyagaraja was as much a product of that age as he was one of its makers. Veterans like virabhadrayya had already set up conventions and standards for the systematic presentation of music. The thanjavur court is stated to have had some 300 musicians of repute under its patronage. Many of them had already proved their mettle both as performing musicians and as composers. It was in the midst of these giants that thyagaraja was called upon to take up this challenging role.

His formidable contempories included pachimiriam adippaiya and pallavi gopala lyer not to speak of syama sastri and muthuswami dikshitar who stood in a class of their own. To those of thyagaraja’s contemporaries who might have regarded his talent as mainly lyrical and devotional, the majestic sweep of the epic style displayed in the ‘pancharatna kirtanas’ must have come as a blinding revelation. Though he handled the madhyama kala and the adi tala by preference, he was equally at home whatever the time measure. Many a raga of which little more than the name was known before his time began to dance its way though the human heart under his life-giving touch. Of each of them he made a fit vehicle for a recondite emotion, which others may have felt before but none could so well express. The fertility of his imagination and the variety, richness and grace of his phrasing open up endless vistas for the musical explorer.