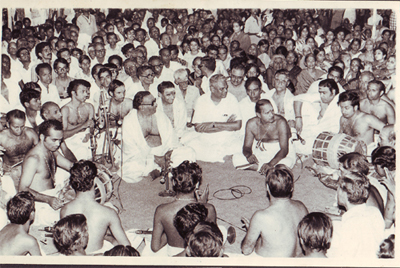 Origin and Evolution
Thyagaraja (Ty.) ‘aradhana’ has now become a global phenomenon. For instance, in Cleveland, US of A, where the ‘aradhana’ has been conducted for more than 30 years without break, the City Council has declared a particular day in honour of the Composer- Saint of Thiruvaiyaru(Tu.). In a sense, the event has come to represent the ‘state of the art’ in carnatic music.
The origin and evolution of the ‘aradhana’ at Tu. has been the subject of much research, resulting in many versions, thanks to our poor tradition of record keeping. The event has acquired many dimensions over the period; its history is chequered. It has not been smooth or solemn always as the occasion warrants; there have been judicial interventions on many occasions.
References, with varying degrees of authenticity, are available only from the early 20th century. Significantly, it is said that the saint- composer himself had expressed a feeling that his memory would gain wider recognition only after 60 years of his ‘siddhi’.
It is interesting to note, that in the kriti, ‘Dayjoochudakidhi velara’, perhaps among his last kritis, Ty seeks the grace of  Dasarathi stating that he has fulfilled the mission assigned to him by the Lord. (‘munu neevaanadhicchina panulaasakoni ne manasaaraka nidhaanamuka salpinaanu’)

The different ‘sishya parampara-s’ (disciple lineages), with their rigid allegiances have sought to highlight their own respective roles, sometimes even blacking out the contribution of other parties. Hence, there is much confusion in the picture. The position is more or less the same as with many details of the life story of the savant himself.
The different accounts have to be reconciled and dovetailed to get some picture. From the material available, the presentation of the scenario and the sequence of the ‘Aradhana’ may be broadly attempted as follows.

It may not be far off the mark to surmise, that in the period immediately after the saint attained ‘siddhi’, the ‘aradhana’ would have been a simple affair, more of a ritual than any elaborate musical tribute. Also, it would be a reasonable assumption, that the grandson of Ty (with the same name) would have been performing the main ritual till his lifetime. He had no issue. The developments after his demise are linked to the initiatives taken by the different ‘sishya parampara-s’, direct and indirect. The alienation of the residence of Ty in Thiruvaiyaru after his grandson’s wife moved over to her parents’ place, necessitated shifting of the venue for conducting the rituals.

With such a large corpus of emotion soaked ‘kriti-s’, continuous disciple lineage, wider spread of his compositions and increasing popularity due to the development of the system of public concerts, the homage also attracted larger involvement. Differences regarding the procedures and ego clashes among the disparate groups became inevitable.
After the death of Ty’s grandson, some of the disciples joined together to perform for sometime, the anniversary alone, in the house of Subbarama Bhagavathar, obviously a disciple, at Tu.