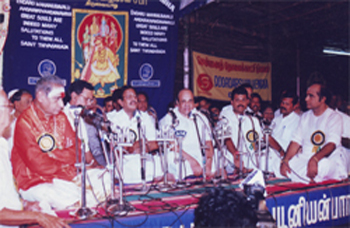 Sri Thyagaraja attained mukti in the year 1847. The mortal remains of this great soul were interred on the banks of the Kaveri and a Brindavana was erected over the spot.

The Umayalpuram brothers, Krishna Bhagavatar and Sundara Bhagaavatar and othes used to go to the Samadhi every year on the Pushya Bahula panchami day, do puja and then return home and perform the aradhana proper. From the year 1907 onwards, the Samadhi Utsava entered a new phase. Tillisthanam Narasimha Bhagavatar and Panju Bhagavatar, along with Tiruch Govindasami Pillai, the great violinist, began to celebrate the festival on a grand scale.

The late Bangalore Nagaratnamma earned for herself everlasting fame by spending all her savings for constructing the fine temple over the Samadhi in 1925. In her last will , executed in 1949, she has mentioned that she had a vision of Sri Thyagaraja on a night in October 1921, in the form in which she had conceived him in her daily worship. She settled down at Tiruvaiyaru an attained the lotus feet of Sri Thyagaraja on 19.05.1952. Her Samathi was erected opposite to the sait’s samathi.

The Tyagabrahma Aradhana Mohotsava Sabha has been celebrating , since 1940, an annual fiestival at the Asramam on the day the Saint shed his mortal coil. The celebrations are conducted on a large and impressive scale and have attained all-India importance. Musicians from all over South India and other parts of India attend the festival and large crowds gather to hear the concerts arranged in connection with it. The religious part of the functions is conducted with austerity by the Nagaratnama Trust. This Utsavam falls every year on the fifth day after the full moon in the month of Pushya(January).

In 1956, Sriramgam Sundaram Iyer, a retired official of the postal department an ardent devotee of Sri Thyagaraja, deided to have all the kritis of the saint engraved on marble slabs and installed on the walls of the Asramam. How this humble individual was able to import Carrera marble from Italy and got 650 Kritis inscribed and installed is a saga of faith and devotion. Donations came pouring in from musicians and devotees from all over India Sri. T.S. Parthasarathy, editor of this souvenir, prepared the authentic texts of the songs in three different scripts and checked the slabs before installation. As the wall space around the Asramam soon got filled up, Sri Iyer utilized the collections to construct the present Valmiki Mantapam to accommodate the remaining slabs.

Sri Thyagaraja Asramam has thus become a hallowed spot, inspiring and purifying thousands of devotees who congregate there year after year.

THYAGARAJA’S VIEW OF RAMA – THE DIVINE

Thyagaraja celebrates various aspects of Rama, the royal person and protector, to the transcendental qualities of Rama, the Supreme Being. We may look upon these aspects as reflective of sources such as Valmiki’s Ramayana and the Adhyatma Ramayana.

Rama as Depicted by Valmiki

Many of Thyagaraja’s songs delight in the form of Rama characterized by Valmiki, as we have seen in some the saint extrapolates from scenes of the epic and creates a vivid picture in songs. For example, in Alakalallaladaga, (“Seeing Rama’s swaying locks”) we are given a sound-picture of Visvamitra’s ecstasy at seeing the motion of Rama’s long hair.

With almost puzzle-like compactness Thyagaraja has composed this song around a feature of his beloved as a youth, with no mention of Rama’s or Visvamitra’s names. There are sangatis of expanding range paralleling the increase of the sage’s rapture, and in a kind of musical pun when Rama’s wavy hair is mentioned there is an oscillating embellishment which aurally suggests curls. The Telugu words for “curls” or “dangling ringlets” which Thyagaraja uses are also wavelike (Alakalalladaga) Thus; the youthful Rama of the Valmiki Ramayana is imaginatively evoked in rippling notes and onomatopoetic words

Besides glorying in Rama’s physical beauty, Thyagaraja celebrates Rama’s integrity. His Dharmic virtues and his might. For example in Oka mata the saint praises Rama’s singleness of expression, fidelity and power.

P. Mind the man whose word is one, who wins  With a single arrow,whose vow is with one wife!
A. Never forget the single-willed one
Even for a single day!
(Mind the man…)
C. He will besnow a lengthy life.
Heavenly raptures of the celestials –
He is the one who is present in the world,
The Lord adored, by Thyagaraja!
(Mind the man…)

Again, Thyagaraja has managed to praise Rama without mentioning his name, depicting him evocatively by suggesting his integrity and sureness of aim. In a number of songs Thyagaraja appeals to Rama as righteousness incarnate, dharmatma – the very self or soul of dharma – law, piety, propriety, Quite early in the Valmiki Ramayana there are lists of Rama’s good qualities, and many of these are found in the songs of Thyagaraja. In these descriptions Rama is the ideal person replete with many virtues and talents

For example, Rama’s sweet speech is well known in the Ramayana; Thyagaraja also sings of this quality of Rama in Palukukanda:

Listen, O ladies ! His speech is sweeter. Than chuks of candy made of pure sugar!
In the durbar hall , Raja Rama calls his servant.

And he speaks with love overflowing, Speech much sweeter then sugar candy, ladies – Listen!.
Listening graciously to the music of the choicest jewels among celestial damsels.
And watching the excellent dancers depicting pangs.
Of love in separation, full of tasteful enjoyment.
He praises them to Thyagaraja, and his speech.
Is much sweeter than chunks of sugar candy – Listen O ladies….

In some songs, Thyagaraja sings of Rama as an ideal king; In this song it is said that Rama was very skillful in the use of the ruler’s traditional strategies, but the Ravana who called himself Siva’s greatest votary, was ignorant of this fact. The four skils of the ruler are:

Friendly persuasion, the use of conciliatory words.

Gifting or conceding. The caramam says that Rama offered to give the permanent gift of Ayodhya. (This proposition is not found in the Valmiki Ramayana)

The use of force. The escalation of strategies, which is relected in notes pushing higher and higher, culminates inRama causing RAvana’s death, as a result of the titan’s ignorance. Rama, as the skillful ruler, has done the needful.